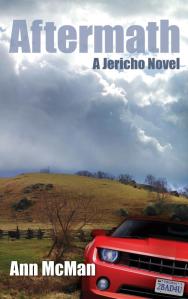 Last spring, I had the unique pleasure of meeting Ann McMan that the Lone Star LesFic Festival in Austin. I had already read Jericho at the urging of my buddy, Salem West, and like everyone else, was captivated. We have since become good friends and I recently enjoyed being privy to the birth of her latest novel Aftermath.

When Ann asked me if I would be willing to write a pre-release review, I was deeply honored…a little rushed—but honored nonetheless.

So the disclaimer: As a friend, this may not be entirely objective.

As a writer, though, I have a little insight into the effort, energy, and skill it takes to produce a book like this. (I will take a small amount of credit for the judicious use of a cattle prod to keep her moving.)

A little over a year ago, the name Ann McMan meant little to most of the community. While she had a following online with the The Royal Academy of Bards and The Athenaeum, most of us were unaware of her gift. Ann is a bright, articulate, and skilled writer with an astounding ear for dialogue and an even more astute eye for detail. These gifts provided the foundation that allowed her to create the mythical town of Jericho, Virginia. To my mind, it’s a 21st century “Mayberry,” replete with an enchanting cast of characters and never-ending store of vignettes.

I won’t provide a summary of the first book, or Aftermath because in her infinite wisdom, Ann encouraged David Jenkins, one of her more endearing characters, to provide you with his version of Jericho just after her intro. She has also thoughtfully provided A dramatis personae—because you won’t know the players without a program.

If I were to compare the two books…and by the way, in the past 14 months she also wrote Dust -an excellent romantic intrigue, as well as Sidecar -a four-story anthology that includes the breakaway, milk-spewing- laugh-riot named “Bottle Rocket”.

Where was I? Oh yes, comparing the two. For me, Jericho was a guided tour down Main Street of a quaint small town with a peek into several noteworthy citizens’ lives. Our guides were Maddie Stevens and Syd Murphy (two women who define like-ability—multifaceted, three dimensional, and rock solid protagonists.) A leisurely stroll allowed us a chance to slow down and enjoy the neighborhood.

By contrast, Aftermath  grabs us immediately and thrusts us into the events and lives of the characters we have come to love. Now we’re privy to a deeper view of their lives, and family secrets both happy and sad. The author has cleverly and effectively book-ended this tale with heart wrenching drama and all its attendant complications. This is a story about community and family, their love, and their resilience.

David sums it up nicely near the end:

“We’re so very happy and grateful to see so many of you here today,” David said. “Michael and I owe so much to all of you, and we wanted to say thank you for all you’ve done to help us stand here and realize our dream . . . once again. The Riverside Inn— like the town of Jericho—has been reborn. And that’s because we all understand that the things that bind us together are more than bricks and mortar. We will endure, and we will persevere because we are part of a family—and families will always reach out, dig down, roll up their sleeves, and lift each other up whenever they fall. That’s what we do because that’s who we are.”

I’m glad that Ann completed this just before Thanksgiving because it’s the perfect tale to put you in the mood for the holidays. Do yourself a favor and don’t hurry through this book, read it, relish it, and savor every nuance, just like the cranberry sauce—even as you are choking with laughter.

Hold close those dear ones that enrich your lives.

And my thanks, Ann, for allowing me to share my humble opinion about a superbly written and conceived novel that I am sure will be enjoyed by thousands more of your fans. It is one I will treasure.

5 thoughts on “Aftermath by Ann McMan”