waiting for a new day. 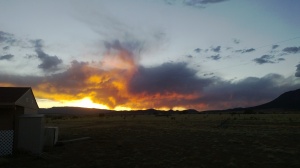 This idea has been fermenting for weeks from several different sources. I started thinking about it earlier this spring because of the devastating drought

we are enduring in the high desert of New Mexico. My property sits within a few miles of a small mountain and is windswept and barren. Before July, we had received no measurable precipitation in almost a year. The small amount of snow never really accumulated and even the minute amount that hung around for more than a few hours eventually evaporated.

Unlike other years, when seasonal rains were generous and a bounty of prairie wildflowers appeared;

this year looked more like the dust bowl. An early “monsoon season” began around July 1 and we’ve had small amounts of precipitation almost every day since. After three weeks, the soil was actually saturated and a few errant weeds began to sprout. Today when I look out, the brown-gray prairie has begun to shift to more of a greenish-gray and the sunflowers are beginning their fall display. Resilience. Buried deep beneath the dried clay are tiny seeds awaiting a little bit of moisture and warmth.

People are resilient too. I’ve read and listened to numerous stories from friends and acquaintances who’ve overcome incredible adversity not just economic or political hardships, but deep, life-altering personal struggles. You 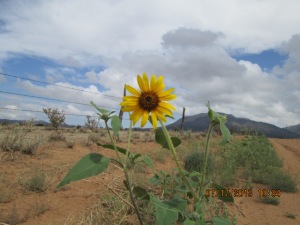 know the kind I mean, the “I complained that I had no shoes until I met a man who had no feet” kind of adversity. Each one is a hero to me.

It amazes me, and on some level thrills me to see people push through it and defy the odds. –Just like those tiny seeds beneath the crusted soil. I’ve always  rooted for the underdog because I understand that desire. We’re made of stronger stuff than we often realize. I’ve had my struggles like many others and times when I thought I didn’t have the strength to get back up again. But, I had no choice. Today, when I reflect on the many times I dismissed some of my darkest moments, I’m a surprised but  proud that I made the effort, proud of the woman I’ve become. I think my parents would be, too. Is it what I dreamed of? Not really. But I think I’m exactly where I’m supposed to be. And yes, I consider myself resilient.

My life path trajectory shifted a bit, recently, when I discovered the work of Dr. Brene Brown and her book Daring Greatly. She is a qualitative researcher working in the field of shame and vulnerability and the quote at the beginning of her book, “The Man in the Arena” has haunted me with its powerful message for several weeks.

THE MAN IN THE ARENA
Theodore Roosevelt

It is not the critic who counts; not the man who points out how the strong man stumbles, or where the doer of deeds could have done them better. The credit belongs to the man who is actually in the arena, whose face is marred by dust and sweat and blood; who strives valiantly; who errs, who comes short again and again, because there is no effort without error and shortcoming; but who does actually strive to do the deeds; who knows great enthusiasms, the great devotions; who spends himself in a worthy cause; who at the best knows in the end the triumph of high achievement, and who at the worst, if he fails, at least fails while daring greatly, so that his place shall never be with those cold and timid souls who neither know victory nor defeat.

I began to understand that as a writer, whenever I publish a book, or share it with another writer, I am stepping into the arena. And it is daunting. It is the very height of

vulnerability. Regardless of what we’re writing—whether fiction or nonfiction—and WE–all of us– are stepping into the center of a very public space to share tiny bits of ourselves. I think that for many of us, some of the truth in our fiction is not the stuff of casual conversations; but more likely small windows into the soul. And when the critics shout from the stands, as they often do, their thoughtless words can cause wounds.

Resilience: the power or ability to return to the original form. 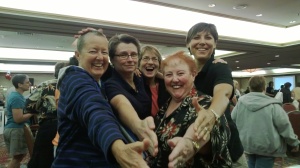