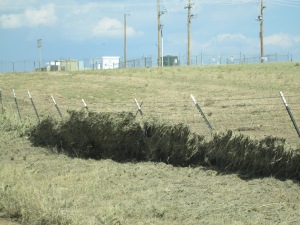 Yesterday, “Aaron the Allstate Good Hands” guy came out to do an appraisal. He was a nice chap former contractor who wandered around, took a bazillion pictures and measurements, and sat in his car for over an hour doing whatever adjusters do in their cars. When he came and he apologized that he had forgotten the checkbook but explained that he would call me today and go through it line-by-line so I would understand all the numbers. I haven’t gotten it yet however; suffice it to say I’m not qualified to be an adjuster. What I believed to be two broken windows, dented vents, and a few missing shingles turned out to be a more epic project, or projects.

As I said, I haven’t seen the numbers but he was talking thousands of dollars and new roofing. Whoops! So my summer of repairs is not over yet. Stay tuned.

After he left, I drove into town to get some grub and snapped a few pictures along the way. What surprised me most was that most of the storm damage was in the area north of town. As I got closer to the business district, the trees and grass to areas seemed untouched. They had enough water damage to lose power but the wind must have dissipated. Very strange, but probably a good thing. The adjuster did say that he had at least 20 calls to make in the area.

Hatch chile peppers and the rural roads are lined with tall resilient sunflowers.

The drought has diminished their numbers and the hail and 60mph winds succeeded in ripping the survivors to shreds.

Who knows where those seeds have blown and maybe next year they’ll be even more.

We live in hope!

12 thoughts on “Roofs and Repairs on the horizon”